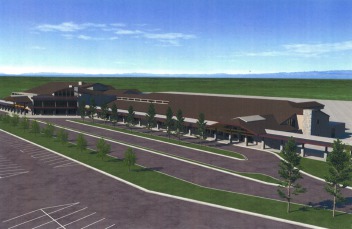 The Gallatin Airport Authority Board decided yesterday to proceed with a major airline terminal expansion. The $40 million project will more than double the size of the terminal and is expected to take two years to complete. The project will expand the number of gates from five to seven, provide a greatly expanded passenger screening checkpoint, add a third baggage claim carousel and increase food, beverage and retail concessions, particularly inside the concourse. The project will also accommodate the increase in passengers that is expected over the next ten to fifteen years.

The Airport Authority Board and Staff have been working with local architects, engineers and contractors over the past three years to develop the project and a financial plan that will provide a state of the art airline terminal facility. While acknowledging that current economic realities have impacted airline travel throughout the nation, the board also included in its decision several positive factors including favorable construction bids, the strength of our local travel market and a strong financial position. However, one of the main factors according to Richard Roehm, Chairman of the Airport Authority, was a combination of an existing need and the development of future capabilities that would make Gallatin Field even more attractive to commercial air travel. “The airlines shop around and operate out of locations that give favorable rates and facilities. We have been successful in the past by staying ahead of actual need, and we will maintain our competitive posture by constructing this new facility.”

The project is being funded through a combination of Airport Improvement Program grants, the Authority’s capital improvement fund and approximately $16 million in outside financing. According to Brian Sprenger, Airport Director, “we have a sound financial plan that essentially uses cash as a 60% down payment on the project.” The financed portion will be paid back over approximately 20 years through the collection of a Passenger Facility Charge (PFC) of $4.50 collected on every airline ticket purchased using Gallatin Field. Airports across the nation use PFCs to construct and improve their facilities for the passengers using them.

Martel Construction, Inc. was selected to manage the construction project and Tony Martel, President, estimates that over 175 direct jobs will be created during the construction of the terminal building. Some inconvenience inside and outside the terminal may be experienced due to construction but planners expect the disruption will be held to a minimum. At the end of two years, Southwest Montana will have a world class air transportation facility that will be capable of efficiently handling more than 1.5 million passengers each year.
July 06 2009
Terminal Expansion Groundbreaking Ceremony
May 15 2009
Airport Board Resolution Thanking Ted Mathis for 28 years of dedicated service to Gallatin Field.
5:07PM
Lost & FoundBadgingFAQ