Bozeman Yellowstone International Airport has gone through many transformations throughout its history. From its origin nearly nine decades ago as Seifert Airport, to serving as the site for the Civilian Pilot Training program at MSU, it has grown into the state’s busiest airport, serving over 2.27 million total passengers a year. 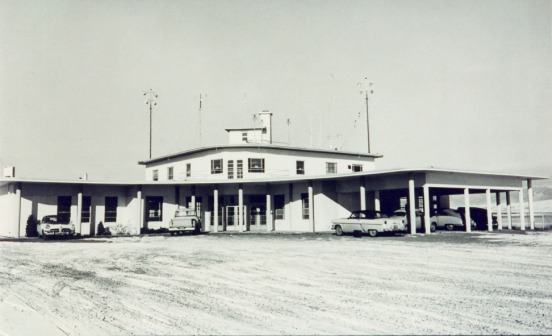 Belgrade's first airport, Seifert Airport, named in recognition of Gallatin County aviation pioneer Wayne Seifert, was built in 1928 near Belgrade, but subsequently relocated because of high-tension wires. Siefert, together with E.R. Kahla, secured land for a second airport through a lease agreement with the State of Montana and the Belgrade Chamber of Commerce. Located one-half mile north of Belgrade near the current site of Gallatin Field, the airport opened in 1929 with six runways 100 feet wide and 1,200 to 1,300 feet long.

By 1937, two generations of Americans had grown accustomed to incredible aviation accomplishments. Lindberg and the Wright Brothers were history, "aviators" were now known as "pilots," and "those daring young men in their flying machines" were now flying "airliners." World War ll was just around the corner, and the aviation industry was about to revolutionize transportation and the progress of man in unimaginable fashion.

The vision of men in Bozeman and the Gallatin Empire was equal to that of men the width and breadth of America. The Bozeman Chamber of Commerce, Bozeman City Commission, Montana State College, and local service clubs began steering towards realization of a major air facility for Gallatin County. 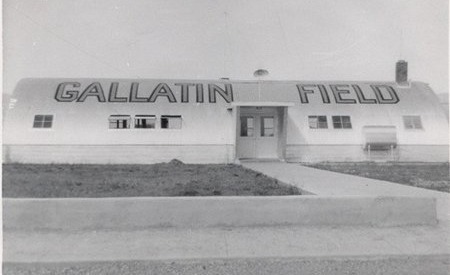 SLIDE SHOW
Gallatin Field in the 1940s
On October 23, 1940, Bozeman City Manager August H. Lake called a meeting to advise those present that they had been appointed to serve on the Bozeman Airport Commission. The new members were: Dean Chaffin, Ernest Anderson, Gardner (Pete) Waite, Eric Therkelsen, and Frank Hoey. There was some discussion regarding the desirability of having an airport for Bozeman. Mr. Lake said that the City of Bozeman had taken a lease from the State of Montana on a small portion of land at the site of the Belgrade Airport and had constructed a hangar on this ground for the benefit of the Civilian Pilot Training (CPT) program currently being offered by Montana State College.Mr. Waite was authorized to check the ownership of adjoining lands and interview the owners to see if additional land might be purchased.

Within the next two weeks, the airport commission met several times. Chaffin, Therkelson, and Waite traveled to Butte for a meeting with Mr. Paul Morris of the Civil Aeronautics Administration where they were informed that some federal funding might be available for their airport if they could finalize the land purchases and airport plans before November 22nd.

Mr. Morris authorized the Army Engineers at Fort Peck to send a crew to Bozeman to survey the site and assist with the necessary drawings. Options to purchase the necessary land were obtained and on November 22,1940, Mr. Morris traveled to Bozeman to meet with the Airport Commission. Following a luncheon meeting at the Baxter Hotel, the group adjourned to the lounge where maps were spread on the table and Mr. Morris and his associates studied the entire proposal.

After studying the windrose chart, he laid out four prospective runways. He then gave instructions to the Army Engineers present on how to fill out the government application forms. He then left for Spokane.

The Bozeman Airport Commission met the filing deadline and on December 19, 1940, received official word that Bozeman had been allotted $47,000 in federal funds for construction of the basic airport.

The Civil Aeronautics Administration (CAA) financed construction of Gallatin Field in 1941 in order to provide a training school for pilots just prior to World War ll. In 1941, the airport included four runways. John F. Lynch and his brother, Charles offered the initial Fixed Base Operator (FBO) service to the airport. In late 1941, John Lynch took charge of the fastest growing air school in Montana.

During the spring of 1941, plans for the new airport were progressing well. To help promote the facility, the Bozeman Airport Commission decided to hold an Aviation Week. In addition to promoting the new airport, it was hoped that the event would show the County Commissioners how important the airport was to the community and pave the way for some county funding.

At a meeting held at the Baxter Hotel on May 7, 1941, it was suggested that a name be chosen for the new airport. The name 'Sacajawea Field' was suggested but it was felt that the name "Sacajawea" belonged more or less to Three Forks and that it might be better to choose the name 'Gallatin Field.' After quite a little discussion, it was duly moved and carried that they name the flying field of the Bozeman Airport, Gallatin Field.

The Aviation Week was held June 9 to 15 and was a huge success. Seventy people attended the banquet and nearly 5,000 attended the Field Day program at the Belgrade Airport. Northwest Airlines had a twentyone passenger Douglas Airliner on the field and made several complimentary flights. John Lynch did some aerial acrobatics and there were many planes on the field during the day.

It soon became apparent that the City alone could not maintain the airport. On July 8, 1941, a special meeting was called for the Airport Commission to appear before the County Commission to present a budget for an airport fund. The group went to the Commissioners' office and was given a hearing.

All possible arguments were used in making a request that the Commissioners levy at least a portion of one mill for the purpose of maintaining the Bozeman airport. The County Commission consisted of P.H. Gaffney, Chairman, Wm. Alberda, and Lee Frank. Mr. Gaffney did all of the talking for the Board and he flatly refused to listen to any of their arguments and said that they would refuse to make any levy for airport purposes.

The group returned to Mr. Chaffin's office and decided that the results of this meeting should be given some publicity throughout the county. They further clarified the name on July 23, 1942 and "It was moved and carreid that this commission recommend to the new Airport Board to be that these names remain "Bozeman Airport" and "Gallatin Field." Gallatin Field became a city-county airport in 1942. On November 22, 1942, Jim Stradley and his passenger Helen McLain made the first official landing at Gallatin Field.  In 1944, Gallatin County purchased one-half interest in the land. 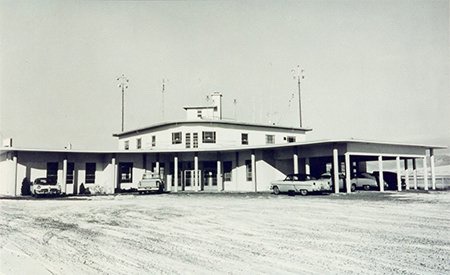 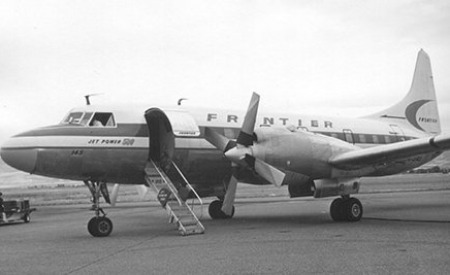 SLIDE SHOW
Frontier Convair 580 Service
New construction, to meet the growth of Gallatin Field, was made possible by an airport bond issue in 1960. The bonds funded a project that consisted of the reconstruction of 150-foot by 5,410-foot Runway 12-30 including new medium-intensity lighting, a new 120-foot by 640-foot general aviation apron, air carrier apron reconstruction and expansion and reconstruction of Taxiway "A". Runway 12-30 was extended to 6,500 feet in 1963, permitting use of the airport by transport aircraft such as the Douglas DC-6 and Lockheed Electra. Taxiways "C" and "D," were constructed in 1965.A number of improvements were made in the late 1960s to accommodate jet service. The main Runway 12-30 was extended to 9,000 feet; Taxiway "C" was widened and strengthened, including new lighting, and the air carrier apron was again expanded and overlaid. The $606,000 for the improvements was paid for by a bond issue and the Federal Aviation Administration. The Airport was additionally supported by a City and County tax levy for maintenance, operations, and administration.
Airport Directors
Edwin Iverson1956 - 1970
Key Airline Events
1961
Northwest begins first DC-6 service to BZN. 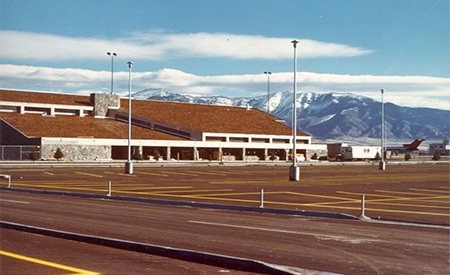 This growth resulted in numerous airside and land side expansions since 2000, including two expansions to the commercial apron, a concourse expansion to the terminal building, a new general aviation tie down apron, and the construction of the East Ramp and a cargo apron. General aviation hangar construction also resulted in several taxilane construction projects including sewer, water and utility construction. The funding for these enhancements was through the Airport Improvement Program, Passenger Facility Charge, and local Airport Authority dollars. 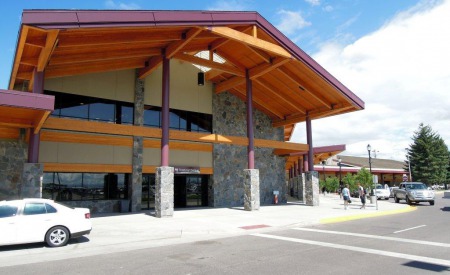