United adds daily non-stop to San Francisco for the summer

United Airlines has announced they are adding daily non-stop service from Gallatin Field Airport (BZN) to both San Francisco and Los Angeles for the summer. San Francisco service will operate from June 9, 2010 - October 4, 2010 and then resume for the winter season 2010-2011. Los Angeles service will operate from June 9, 2010 - August 23, 2010. Flights will be operated by SkyWest Airlines. The San Francisco non-stop will also return...
KEEP READING

Historically, Gallatin Field Airport has not offered monetary incentives to airlines for new or increased service based on the philosophy that such service should be self-sustainable. However, with the well-documented struggles of the

The Gallatin Airport Authority has an Other Transaction Agreement with the Department of Homeland Security Transportation Security Administration for "ARRA" investment to address the construction of Checked Inline Baggage Screening systems for Gallatin Field Airport. Further information is also available at www.Recovery.gov

The attached file is the Airport Sponsor Certification pursuant to Title XV, Sibtitle A, section 1511 of the American Recovery and Reinvestment Act (Pub.L. 111-5 Feb.17, 2009) "ARRA."

“This clearly signals we are now in a growth mode,” said

“Last summer’s and winter’s Saturday service to San Francisco was very popular with customers and its success was instrumental in United’s decision to make this winter’s service daily,” said Brian Sprenger, director of the Gallatin Field Airport.

The Gallatin Airport Authority has embarked on a significant expansion of the airline terminal building. This expansion is the largest airline terminal expansion ever in the state of Montana. Unfortunately, this expansion will not come without some impact on our customers. The Gallatin Field Airport handles approximately 700,000 passengers every year. Of these passengers, 300,000 use rental cars, 100,000 use buses, taxis and shuttles and 300,000 are either dropped off at the terminal...
KEEP READING

The Gallatin Airport Authority Board will be holding the following airline terminal expansion groundbreaking ceremony:

The public is invited.

The Gallatin Airport Authority Board decided yesterday to proceed with a major airline terminal expansion. The $40 million project will more than double the size of the terminal and is expected to take two years to complete. The project will expand the number of gates from five to seven, provide a greatly expanded passenger screening checkpoint, add a third baggage claim carousel and increase food, beverage and retail concessions, particularly inside the concourse....
KEEP READING 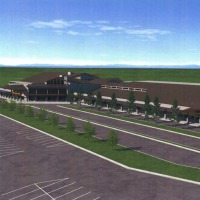 Whereas, Mr. Theodore Mathis has served continuously as Airport Director of Gallatin Field from July 1, 1981 to May 31, 2009, and

Whereas, During his time of service Gallatin Field has increased passenger boardings nearly 500% to over 350,000 annually, and